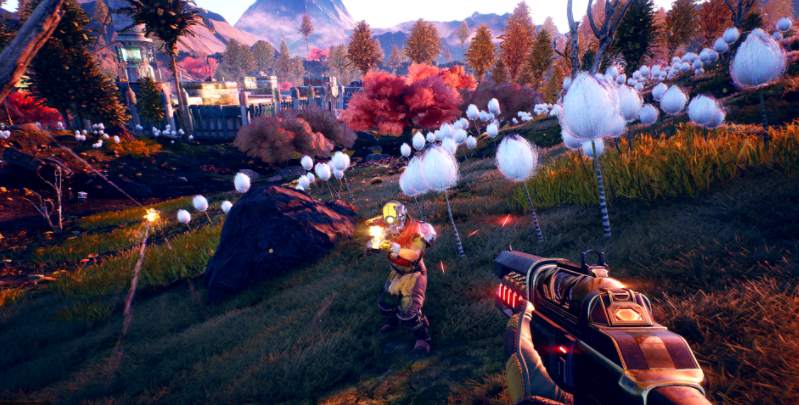 In this blog series, I’ll be breaking down Oblivion’s journey with the Outer Worlds, and the marketing strategies surrounding it. This will be a continuous blog, so information may develop over periods of time.

The Outer Worlds is a narratively driven, first person shooting game developed by the game studio Oblivion, published by Private Division publishing company. The game can be both a tangible product and a downloaded item, but the experience of the product is all digital, making it more of a service than a good. The product is available for many systems to play it: PlayStation 4, Xbox One, Nintendo Switch, and any computer. Because I’m going to be pursuing game development in the future, I wanted to focus on a product from a company that I’m interested in applying to. Obsidian is an interesting company because they’ve traded a lot of hands between large publishers. While they published The Outer Worlds with the publishing firm Private Division, they are now owned by Microsoft Game Studios and publish their future games under that new name. Here we’ll break down the 4P’s of marketing: Product, Price, Place, and Promotion.

Being a narratively driven video game, players can get lost within its complex branching storyline, with each play through of the game being different than the last. Even if the game is roughly 20 hours for a whole playthrough, players can experience something different each time they restart, given them an endless amount of re-playability and content. With all the different choices the game offers, players can manipulate the game in how they want to play it. Want to have a strong team to explore new worlds with? Talk to your members and formulate a cohesive workplace. Want to blast through, guns blazing, all on your own? Reject team members and start shooting. Being a single player game allows the game to cater to each individual player, rather than being slightly generic for a wider audience.

There is a lot of variation for the pricing of the game. Since the game is available on most platforms: PlayStation 4, Xbox One, Nintendo Switch, and Epic Games Store and Steam for computers. Because of these different platforms, this means that it is sold on all of the various digital storefronts that it appears on. Most of the time, games try to be the same price on every store, but stores can lower the prices to be competitive, and offer limited time sales. The game also has the opportunity to offer the game at full price when it reaches a new store, due to buyers being typically dedicated to a specific platform or store. An example of this is when it comes to Nintendo Switch June 5th. It will probably be at the full price of $60, instead of its currently discounted price of $36 (found on Amazon) on the platforms its been on for half a year. There are also “second-hand” retailers both digital and in person that sell games. Walmart has started selling newly released games for $10 less than other retailers to attract more people to buy games from them. This is a smart move for Walmart, because a lot of brand new games that are as big as The Outer Worlds start at the hefty price of $60 a piece, so cutting consumers a break and offering the game slightly cheaper at $50 gives the buyers a positive attitude when shopping at Walmart. The benefit of also getting games from retailers is that used games usually go for a lot cheaper and can depend on how much that user sells it for.

Here are all the current locations and prices where one can obtain a new hard copy of The Outer Worlds:

As seen previously, the game is sold at a variety of different places. It is important to note that most of these places are digital store fronts, and stores like Walmart and Gamestop also have their own digital storefront. It is important for this game to be on as many storefronts as possible, due to the nature of players and their dedication to a specific platform. Many people were outraged in learning that the game won’t be released on Steam until a year after it was released on the Epic Game Store. Even though both storefronts are located on the computer and both can easily be downloaded by similar means, there is a large group of people that refuse to have multiple storefronts downloaded on their computer, and want their library of games to all be in one place. The benefit of having a video game produced both as a disc at retailers and a digital copy is the versatility of how the product can be sold. By having hard copies, smaller, lesser-known stores can sell the game, and used sellers like eBay can list their prices as well. By having a tangible product allows it to share many hands than if it were to just be sold digitally. If it were to only be sold digitally, it couldn’t be used as a gift for someone to unwrap. This problem with tangibility for digital content is solved, however, when we look at download codes. While the disc may not be available, a card with the download code can be bought. This allows in-person store fronts to serve the same needs as digital retailers, so the people who still enjoy shopping at brick and mortar places for games can still have the same feeling for when they shop digitally.

The announcement of this game was exciting and slightly unexpected for people. There was almost a cult following of people who enjoyed their previous story-driven game Fallout: New Vegas, which was released years ago. The developers also keyed in on the fact that they combined the two different styles of games into one, by getting the look of Bioshock (another cult classic) and New Vegas. Even though Microsoft was the ones publishing it, since they recently acquired Oblivion Entertainment, they made the new game front and center in their series of announcement trailers. One of the fastest growing events of the year, The Game Awards, featured the game, showing it off to the millions in the crowd and those watching online. The next year, the year the game released, the game itself was nominated for four game awards. Being in the public eye is very important for games, so being able to reach the large stages of these gaming events is a big promotional opportunity. By having a clean, funny trailer that gets audiences happy and excited, The Outer Worlds was able to integrate itself and become an instant hit.

Microsoft also has a lot of power in the gaming marketplace, with both computer and gaming system platforms and systems, and an immense amount of assets to purchase full game studios. Because of Microsoft’s control, they were able to make The Outer Worlds free on their streaming platform, Xbox Game Pass, day one. Game Pass ask consumers to spend only $10 a month, in exchange for consumers to play a wide variety of games. As a consumer, not having to buy multiple games and being able to play them for a cheap $10 is a great benefit. In terms of The Outer Worlds, Game Pass also let players “pre-download” the game. This means as soon as it was released, players could start playing it without having to wait for any downloads. Pre-orders are a big promotional tool for games because it both gets people excited for the game, and it also fills the need to have the game right away. For games that are a bit older, which the game is for the most part, many sellers offer competitive discounts that’s usually tied into other games that are on sale as well. These sales god be developer related, like all the games the developer made are on sale, or theme related, like any space games (which this game is) are on sale.