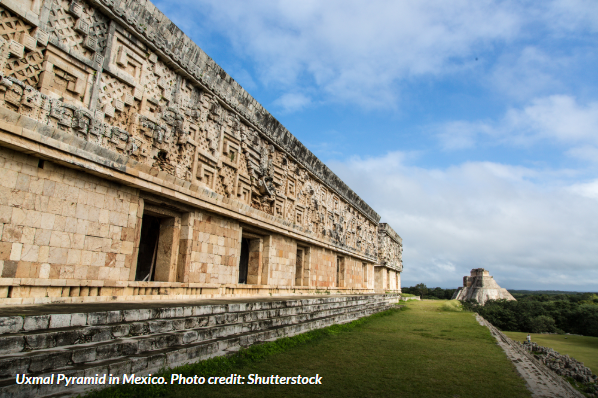 In this blog series I take a quick look at people, places, actions, and things and break them down and compare them to games. Today I decided to shift my focus to the artwork featured in Maya architecture.

A glance at the past

The early Maya societies were prosperous, and built large plazas to host the work of both the noble and the common folk. The homes of the nobles, including their religious burial sites, were often made into these large, looming stepped pyramids that overlooked the plaza. Atop these pyramids were ritual chambers for the celebration of specific gods. Many of these pyramids were also home to observatories. Because of their obsession with the night sky, this lead the Maya to create on of the most sophisticated calendars ever created. The calendar comprises of three calendars, one tracking 365 days, another tracking important events, and another tracking thousands of years in both the past and the future. It’s unfortunate that during the Spanish inquisition all but four of the Maya literature was burned. The Maya’s way of tracking information was not our typical way of writing words, but they were actually in forms of pictograms. These pictograms represented different words, and can be combined in a series of blocked pictures. Even though the writing of the Maya was mostly burned, fortunately they kept their history sculpted upon their architecture.

Due to the limestone-enriched soil in the Yucatan Peninsula, where the Maya were located, the Maya were able to use a combination of mud and plastered bricks to create these large structures. By starting small, they built on top of the same formations over and over again, which reflected the city’s growing population. It is on these structures that we can find unique design patterns and their hieroglyphics.

By looking at the different stone workings, we find common patterns that they used. The use of the spiral is found in many spots upon the stonework. The spiral could represent tails of different creatures. Serpents were an integral animal in both Maya architecture and religion, from the crawling serpent temple El Castillo, with its depiction of a crawling serpent during the spring and autumn equinoxes, and the feathered snake Maya god Kukulkan. Another feature of architecture is a kind of cross-hatched, checkered pattern. These individual blocks could have had more hieroglyphs on theme, but due to the softness of limestone, they could have weathered down. A prominent feature in much of the architecture is the use of stone faces or protrusions. Because the building’s history was document upon itself, and the Maya scripture was depicted in pictograms, it makes sense to have facial features appear on their architecture much like it does in their texts.

What makes their architecture so fascinating is how it appears to be just a combination of multiple patterns, expertly placed in sequence. It almost appears to be like a quilt of some sort, stitched together as an assortment of multiple designs. Going on the fact of the Maya building on top of previous buildings, they would also place carvings on top of one another. It curious to see that of the parts of building used for decorative design, there are no blank spaces, or breaks, within that design. Even though the design consists of multiple different patterns, it is formed to create one unique whole.

The current game I’m working on, Vex, is a 2D, resource management, geometric survival game, where a player must defeat waves of different shapes. Trying to create a theme and art style for the game, I happened to think of Maya architecture and its intricacies. I decided to have the background become completely filled with a pattern representing the likeness of the Maya art, and all the different shapes depicted in the game be pieces of the background pattern. The patterns seemed to fit well to the art of the Maya, especially the spirals and the checkered patterns. This was due to the fact that the art I was recreating it on was through pixel art, which lead to a more block-y square pattern. While the pixel art is made up of a series of squares, I wanted the artwork to feel more fluid and natural, like if it was the written Maya hieroglyphs, so each pattern isn’t exactly the same size as the next.

As I’ve mentioned before, the kind of patterns in the Maya architecture could be considered a kind of quilt, almost fitting together like puzzle pieces. Since brick is laid by placing it on top of one another, the game of Tetris can resemble the act of creating the architecture, due to both having uniquely designed blocks. When a Tetris board is also filled with blocks, it appears as a kind of quilt as well. If we think about spirals and snakes as a big feature in Maya architecture, the game of Snake also comes to mind, with the player curling around to grab the items. There is some comparison to the snake growing in Snake, and the way the Maya would constantly build buildings on top of one another.

Interested in learning more about the Maya? Check out these links!