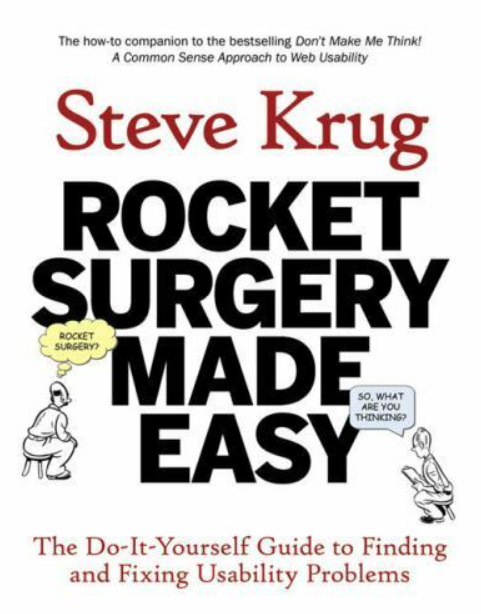 “Rocket Surgery Made Easy,” by Steve Krug, is a simple little book about how to get you starting your own usability testing.The biggest goal of this book is to get UX designers motivated to do user testing. One of the most important parts of doing UX work is seeing your designs be used by outside users. We designers think these tests need to be important, that they need to take weeks to perform with a large group of people, costing the company a lot of time and money. Krug is here to tell us this isn’t so.

Testing needs to be done ASAP. As soon as wireframes, sketches, or simply ideas are being generated, you need to get them in front of people. We may get embarrassed at this. I’ve seen companies and people keeping their products secret until they reach an “alpha” phase. Already this is too late to start showing people. What happens when you’ve spent all this time working on a product, only for no one to understand it? You just lost so much time thinking that it wouldn’t be understood until it was pretty enough.

Krug wants you and other designers to take charge and perform some quick tests. These are meant to be rapid, qualitative tests. Quantitative tests are used to judge the proficiency over many iterations, typically within your segmented market, but qualitative tests are more emotional, and can easily be adapted to fit the right scenario. Krug has a system of mantras to get you confident about your usability tests:

Krug believes testing just has to be with 3 people who sit roughly in your target demographic, an have company members watch in on the sidelines. Some of this advice is good: test early and often, focus on the most important problems, only tweak, and do not include drastic changes. Other aspects he talks about lie too much in a “perfect world” scenario. He asks for a little bit of testing per month, which could be done, but he says in person with stakeholders involved. You can always tell how old a design book is when it doesn’t talk about how useful online tools are, or when they talk about using antiquated data. People will not have the time to come meet you at a location and perform tests. Stakeholders and upper management also do not want to be bothered every month to perform all these tasks in person. With the covid pandemic, a lot of what we do has transitioned online, and user testing is no different. Online tools like Zoom, Miro, and Figma are all great resources to do testing online, as well as communicate with the team in earning and improving. Instead of wasting others time and requiring others to cut out some of their schedule, these tests can be recorded for later use. It was mentioned, however, that people will be less obliged to watch the video, but if you require that whoever wants to be in the debriefing/decision room, you have to take part in the viewing of the test.

While the points Krug makes in the book are important, substance-wise, he doesn’t really say much at all. He lists how to properly prepare and organize a test, what things to test about, and how to analyze the test, but there isn’t a reason for it. “It just works,” is what is implied constantly through the book, solidifying the fact that the scenarios he talks about are too perfect. What is important is how to do testing, and create a system where you can quickly adapt. If not all the people can make it back-to-back, so be it. Why burn yourself out trying to do multiple tests in a row? Your schedule needs to be as flexible as the testaker’s because you don’t want them coming in already in a sour mood.

Another way he composes his thoughts are disjointed and full of padding. One constant thing that he’s done in both his previous book “Don’t Make Me Think” is footnotes. He loves footnotes. They’re mostly meaningless, useless tidbits of information, but the problem with them is that it takes up space on the page and if you’re trying to read them concurrently with the writing it rips you away from the point he’s trying to make. After a while you have to just ignore these, and come to the conclusion that it won’t get you any further in understanding the information he’s trying to say. I can understand that he’s trying to create a lighthearted tone within his writing, but he is worried so much in keeping this tone that the information he gives is lost. This book could be reduced down to a short article (or blog post like this one) if you were to remove all the filler.

Besides the negatives, “Rocket Surgery Made Easy” is a breezy read that gets you excited and feeling confident about doing some user tests. So get to it!

Find the book on Amazon ->