World Design of Journey to the Savage Planet 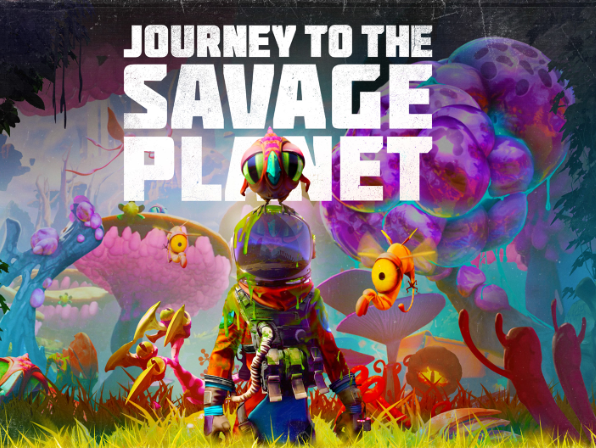 Journey to the Savage Planet (JSP) is a 3D first person platformer, where the player is set on a strange, undiscovered planet. The goal of your character is to confront the lifeforms that have inhabited this planet, and find enough fuel to leave.

A lot of the joy from this game comes from strange environments and creatures that the player experiences. With the setting of being stuck on a planet, the ideas and opportunities to a developer can be nearly endless, but to develop a meaningful world what it contains must make sense. In JSP, there are different forms of terrain that you progress through in this order: arctic tundra, sparse forest (with crystal caverns), desert plains, swampy lowlands, stony cliffs, and a gastronomic temple. There are of course various little areas that are between these themes, which helps blend the world into something more realistic. There isn’t a point in the game where the scenery doesn’t make sense from its other surroundings. For example, if you were walking down the city streets, you would be expecting for a jungle to be right in the middle of the road. JSP has succeeded in creating something unifying to make a strange world believable.

In what ways do the developers create a homogeneous world? Lets first take a look at the different kinds of plants and foliage that the areas have. Within the arctic tundra, the only kind of plant that exists are the ones that drop seeds to help you replenish health. Having just this one plant at the very beginning of the game allows the player to focus on the plant’s properties. With it being the only one in a remotely empty room, the player can recognize what it is, what it does, and what to look for when they ever are low on health. The plant is also a bright yellow/orange that can catch the eyes of the player, and the large pill-looking seeds tells the player if the plant can provide health or not. This plant is seen throughout all of the game, since it is one of the most important plants out there.

There are also other plants that have importance as well when it comes to special powerups. The plants that do special things for the player are also split in multiple kinds of categories: world shaping and elemental. By “world shaping,” I don’t mean that the player is terraforming, or shaping the actual world. I mean that these items add new properties to the world. There is one plant that is a kind of bouncy substance so players can reach new heights. There is also a purple fecal looking substance that causes creatures to stick to it. Then there are the grapple plants that sprout along cliff faces to grapple to. These three plants are all found in a kind of cocoon/pea pod kind of plant that hangs quietly in the shadows. These plants also appear through the world, and are typically placed near where the player has to use them. The unfortunate design of these plants is that they all look the same, so the player isn’t sure what it contains until they break it open.

The more important, elemental powerups are very distinct from each other. The three different kinds are: bomb plants, acid plants, and electricity plants. These plants are special in that they also have “offspring,” which are the different stages in its growth (the game calls it child, teenager, and adult). These younger versions of the plants allow it to look like there’s a large area of them around, when really its only the adult type of the plants that you can harvest from. Being able to have a patch of the plants give them greater importance in the game because they take up more of the space on the ground, which can make them easier to find. It also presents a kind of life cycle to the player. By showing the different stages of life of an organism, the player gets a sense of progression as it understands the forms that the plants can take. In videogames, it can be difficult to show that the game world is its own living ecosystem. The player is only experiencing that world at a certain moment in time, so designers much plan out the history behind the world they are trying to create.

The designers use the special elemental plants as an introduction to what’s to come. A game that resembles this kind of powerup structure is the game Hollow Knight. In both of these games, the player is presented with a wide variety of paths from the start, but some of these paths are unreachable. The suggestion of these opportunities is what excites the player to start searching the game world in hopes to be able to achieve new goals. The term “goals” is very important here. Without goals for the player, what is going to want them to keep playing the game? Goals can be in various forms, from winning an online match, to being able to reach the end of the level. For Metroidvania games like this, (both Metroid and Castlevania introduced the style of multiple branching paths that are meant to be back-tracked after gaining new powerups, giving it its name), the goals of the player are how to reach the new location. Progress is then determined by the player’s ability to reach new destination by using the powerups they unlocked along the way. By having these powerups appear throughout the world, even in the earlier levels, brings a sense of cohesiveness to the game, and is exciting when the player realizes that they remember seeing these plants back in the beginning. While the world design succeeds in creating a continuous world, it also prevails in memorable areas.

There are four big locations in the world, each split up by smaller areas. The smaller areas themselves can have a completely different theme to the next. For example, in the second location, the player starts at a location called “Itching Fields,” which is this kind of moldy dry grass covered plain. The farther the player progresses, however, the world turns into a kind of swamp area with large mushrooms to jump on. These areas each have different kinds of flora and fauna, as well as their own color scheme. What’s fascinating is how the game takes a kind of creature and adapts it to each area. One of the more prominent creatures in the game, which are these flightless chicken-like birds with big eyes, are iterated upon throughout the world. In the arctic tundra, the chickens are woolly and have tusks, while in the forests they are pink and colorful like the plants and don’t have many feathers. By having the different types of the same kind of creature, the designers create clear differences of each area while also having a continuous set of recognizable creatures.

While there are all these strange and exciting creatures, the boss battles feel a little lack-luster. Some of the bosses, which are just this large dog-like creatures, appear multiple times and feel a little copy and paste. These creatures are also frustrating to battle at times because predicting what they are going to do next is completely randomized. While there’s really only two different kinds of attack states, continuously judging the wrong one can lead to some anger-inducing battles. Since the game is in a first person perspective, it’s difficult to judge if something is going to hit you or not, so trying to dodge out of the way from attacks can seem impossible at times. I think the designers had a little trouble trying to balance difficulty within the game. For the most part, the bosses weren’t difficult, but extremely repetitive, where only certain parts of their tail would hurt them, but if you were facing it the wrong way, you missed your chance of attack. Most of the bosses were just various forms of target practice, which could get dull after a while. I think why the designers chose this method of battling is understandable, however. The player is only allotted one weapon throughout the entire game, with only a couple of powerups to help make it shoot faster or fire a more powerful shot. That means having the player persistently fire at the bosses while watching their health slowly trickle can become tedious. The target practice makes sense in a way, because it forces the player to view their surroundings and move around while avoiding attacks.

A just have to step aside from all the world building and design and talk about my favorite mechanic in the game: grappling. I’m a sucker for games that grapple. I’m not sure what the reason is, but the act of grappling feels like you’re bring the world closer to you, and could feel like a trampoline that’s propelled by your arm. In “Journey to the Savage Planet,” the grapple is one of the core mechanics in the game, and is one of the most satisfying actions to perform in my opinion. There’s a lot of aspects to the game’s grapple that I think helped it out. First, when you launch the grapple, the player reins it in like you just caught some cattle with a lasso. Second, when you reach the point of grappling, you stop on the wall. I think this decision is kind of unique to the game because in most games a player would simply start to fall once they reach the end of their tether. Since the game is focused on platforming, being given the a moment to get your bearings and look around is nice. A third aspect of the grapple is its trigger distance. What I mean by this is the grapple icon can be turned on from a far distance away, allowing you to travel that distance. Because the game is a big open world where the player can see far off in the distance, I find it nice that a player can see a far away target and reach that point without too much difficulty. To relate the mechanic back to world building, the grapple might be the most important tool because it allows the player to reach great heights in a matter of seconds.