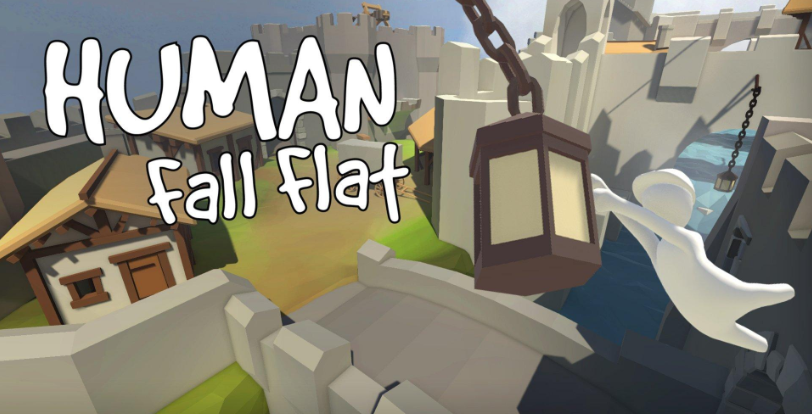 In this blog series I take a game I’ve completed and analyze design aspects randomly given to me from the Game Design: A Deck of Lenses app by Jesse Schell.

Human Fall Flat (HFF) is a physics based puzzle game with quirky ragdoll mechanics. The goal for your character is to reach the other side of the level by doing a bunch of tasks.

The Lens of the Avatar

The avatar is the player’s gateway into the world of the game.

In this game, players play as a kind of ragdoll in the form of a soft, clumsy Pillsbury dough boy. The way the character moves is a kind of waddling as it tries to walk with its limbless appendages. Both of their arms and legs are kind of stubby and a tad difficult to control, but in this game, the movability of the character is the most important part of the game.

By having a game called “Human Fall Flat,” it’s expected that the player will fail a lot because of the clumsiness of the character they control. The “Fall Flat” part of the name derives from the phrase “falling flat on their face,” like when someone trips. Would this kind of playable character be something for players to enjoy? I think for the most part, yes, but there are times where the character gets in the way of themselves, but more on that later. In terms of the player projecting themselves onto the character, it can be a little mis-matched at times. The character starts off as a completely blank slate, with no features at all. The player may enjoy this featureless persona, but the game is hinting at the fact that the player can customize their character. The whole act of customizing allows players to put little pieces of themselves in the game by having a character look how they want it to. The whole act of customizing a character can be a delicate balance. On one hand, there may be games that let the player customize their character in too fine of a detail. This seems to be the case in many RPG’s. There are other times where there are not enough customizable pieces to a character, like the developer didn’t create as many costumes to try on, or those costumes are locked behind a paywall. If a player doesn’t feel that any of their customizing choices fit with their own self, a player can feel a little disjointed from the game. At that point, a connection is lost between player and character. There’s a noticeable difference between a player saying “Oh no I fell off the cliff!” and “Oh no my character fell off a cliff!” Just by how the player describes the character they’re controlling show us how truly they connected are to the game.

Back to my reference on movement. There are a lot of situations in this game where the player has to do some fine motor movement to get through a level. This could include platform jumping, climbing up ledges, and steering cranes. The “fun” found in this game is from the character’s inability to be able to perform these movements well. Besides the player lacking limbs and having bouncy, gooey physics, the clumsiness also is in the controls. Both the direction of the arms and where the player moves to are controlled by the same control stick (I was playing on an xbox, it could be different on the computer). Now having to overcome this strange function of the mechanics can be fun, but there are times where things can become frustrating. This kind of game comes down to the perspective of the player. If a player is happy and doesn’t care to really reach the end, then the game can be fun and goofy as they fail multiple times. If the player is trying really hard to get to the end, however, I can see the player becoming frustrated as they try to not walk off of a crane while also trying to steer it.

The Lens of Resonance

To use the Lens of Resonance, you must look for hidden power.

What is it about HFF that makes the game special? I think the game really likes to advertise how players enter the level when they fail. When players enter, they fall through the air and belly flop onto the ground. By having the players constantly do this, the game is promoting silliness in its movements. The game is telling the player that things are going to be ridiculous and blown out of proportion, just by showing the player splatting on the ground.

The act of having the player fall into a scene tells a lot about what is going to happen. The game tries to tell the player that it’s fun to fail. If a player would have just entered the scene without any kind of dramatic entrance, then the players would lose the fun in it. By telling the player that it’s fun to fail, the game can get away with the player accidentally dying multiple times without being too frustrated. Having failing be funny can relax the player because they don’t have to worry so much about surviving. There are also times when players play with others and they try to get others to fail, rather than actually focus on the level. This turns into more of a meta game where players are climbing over each other and landing on top of one another. It’s interesting to see just how effective it can be to make failing a silly focal point of a game.

The Lens of Beauty

Beauty is mysterious. Why, for example, do the most beautiful things have a touch of sadness about them?

In this cell-shaded, polygonal world, what makes this game beautiful? Due to the layout of each level being a series of challenges, there are sometimes when you reach a high point you can see all the things that have to happen. It’s moments like these where the player is filled with excitement as the question the purpose of all the things that lay before them. Most levels have a theme to them, like a steam factory, medieval castles, and an ice level. The game plays on a lot of these kinds of themes, by having the challenges be integrated within them. For example, in the ice level ice cubes are used as platform devices, but they slowly melt if placed in the sun. The trick is in finding the shadows and trying to get the cube there before it evaporates. This causes the player to look at the level a slightly different way because instead of looking up around them, they are looking down at the ground for shade. Being cell shaded, however, has the objects lacking detail, and can make a lot of the levels seem kind of bland.

If the game portrays fun through its player movement and failing animations, it doesn’t try to portray it in anything else. Because of its lack of details, there are just areas with muted colors and nothing much to look at. For a game that’s about grabbing things and ragdolling about, the game tries to keep a seriousness to how it presents itself. The contrast between the silly movements of the player and how the levels portray itself could be funny if seen in more of a dry humor sort of way. There’s no part of the level that tells the player to be goofy. The only real goofy things are the players themselves as they waddle throughout. Perhaps it’s social commentary where even though the world can be daunting and serious, humans still have a chance to be silly. Part of me wishes there was some acknowledgement that the game knows it’s silly, perhaps the narrator at the beginning could speak some funny quips, or the scene could have an obnoxious color palette.

The music in this game is also something to talk about. Before going into the game, I thought the music would be lighthearted, like some quiet jazz squeaking in the background. Upon opening up the scene, however, I’m greeted with this giant swell of emotional strings and piano. On one side the music is nice, and tries to be elegant and professional, but on the other side it just doesn’t really fit what’s happening. If the game is trying to be completely serious with its theme, level, and music, then the developers nailed it, but is it what the game needs? Some would say the juxtaposition is funny when compared to the goofiness of the characters, but personally it dampens my mood to have fun. The problem with the music as well is that it goes away, so there are moments where you’re just walking around and you can only hear the thumps and bumps as you run into things. Perhaps the developers wanted to accent on these sounds to help accentuate how clumsy the player is, but the lack of audio and connection between the seriousness and the silly just adds to the blandness of the game.

I think the game is a lot of fun, especially when playing with friends who are also wanting to be goofy. I wish the game focused more on being silly rather than having a serious side to itself. Of course it’s always the players that bring the fun into the game, but it’s nice to have a game that encourages the fun that the player can have. While the falling feature is funny, it’s the only feature that is.

Thanks for reading! You can find the “Deck of Lenses” by searching for it on the app store. You can find Schell’s full book “The Art of Game Design: A Book of Lenses” here. Try Human Fall Flat here! What did you think of the game? What were your favorite and least favorite parts? Let me know in the comments below. Have a great day!